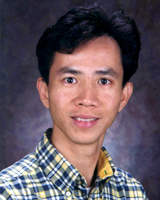 My second research interest is in studying of the growth for the norms of polynomials with integers coefficients. We are particularly interested in investigating the properties of polynomials having coefficients +1 or -1. We call these Littlewood polynomials. This class of polynomials has been studied from a number of points of view and a number of interesting open problems on these polynomials have been raised. We are interested in studying the behavior of the L4 norms (over the unit circle) of Littlewood polynomials. More specifically, one may want to find a sequence of Littlewood polynomials having small L4 norm. The present best example, known as the shifted Fekete polynomial, is constructed by using the Legendre symbol which is used to study the quadratic residue in number theory. One of our works proves some amazing exact formulas for L4 norm of the shifted Fekete polynomials while all the previous results are just asymptotic estimations. We are now working on extending our ideas to estimate L4 norm of other polynomials. This study is also related to the problem of finding the easily distinguishable binary sequences in the information and communication theory.

The followings are the other problems which I am recently interested in: